When is the best time to visit My Son Sanctuary?

How to get My Son Sanctuary from Hoi An or Da Nang city?

What to see in My Son Sanctuary?

Where do I book the trip?

Who built My Son?

My Son Sanctuary is the group of Hindu temple built by the ancient Champa (Cham) people from 7th to 13th centuries. Thus, My Son in Quang Nam Province, Vietnam is considered as little Angkor Watt of Vietnam because of its featured architectures and historical period of time.

The Cham people, for such a long time, known as Master of Brickwalls in building such an amazing and glorious Hindu structure to pay respect and gratitude to their ancestors. So, they had chosen a sacred place in My Son Mountain to build the temple. This mountain was said to be the Mount Meru of Vietnam. Hence, in the valley of My Son, the Cham built around 70 Hindu temples. 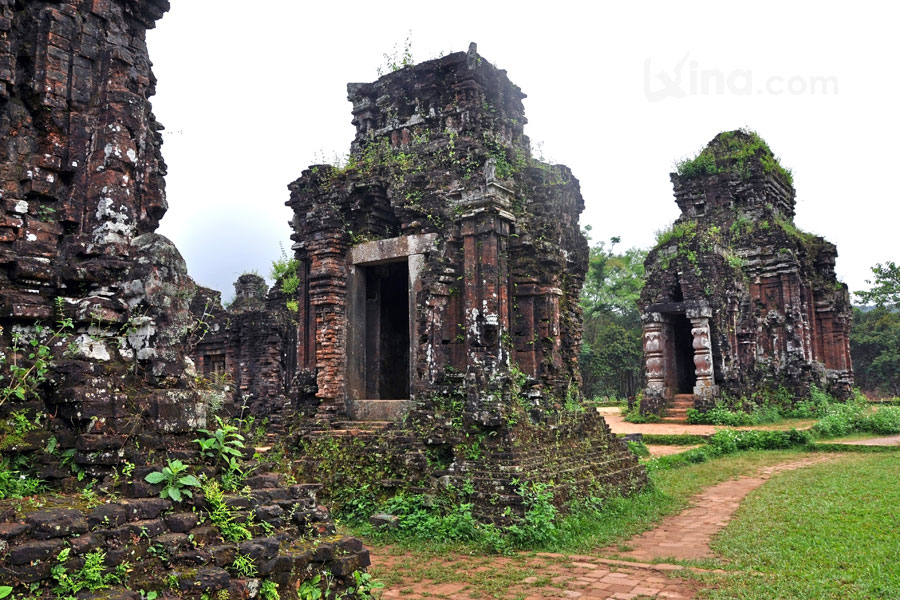 Amazing Hindu Temple in My Son

Moreover, My Son Sanctuary had a groups of temples classified into several groups of A, A’, B, C, D, G, E, F and H. Each group in My Son had the main temple of Kalan where ceremonial offerings happened and where the Cham people worshipped a set of Linga and Yoni. By the way, the main door of this temple faced the east that is in Cham’s belief, representing the direction of lives and creation.

Besides, the group had several auxiliary temples around the main one to play the roles of different purposes. For example, the Gate temple B2, the change room B3, the holy water storage B4 ect. All the temple makes a highlight or landmark for each group.

Who discovered My Son Holyland?

the French people discovered My Son Sanctuary in 1895. Later, they cleared up the dense jungle of My Son to conclude that My Son had various groups with around 70 temples and towers.

And in the Vietnam war in 1960’, it was a hide out for Viet Cong guerillas when they chose this mountainous area to hide themselves away from the Americans. So, this area was heavily devastated by the the bombings.

In 1994, archeologists from Germany and Poland came here to do lot of restoration and they tried to preserve all beautiful structures left after the time. So, on December 4th, 1999, My Son Sanctuary was listed as World Cultural Heritage of Vietnam. 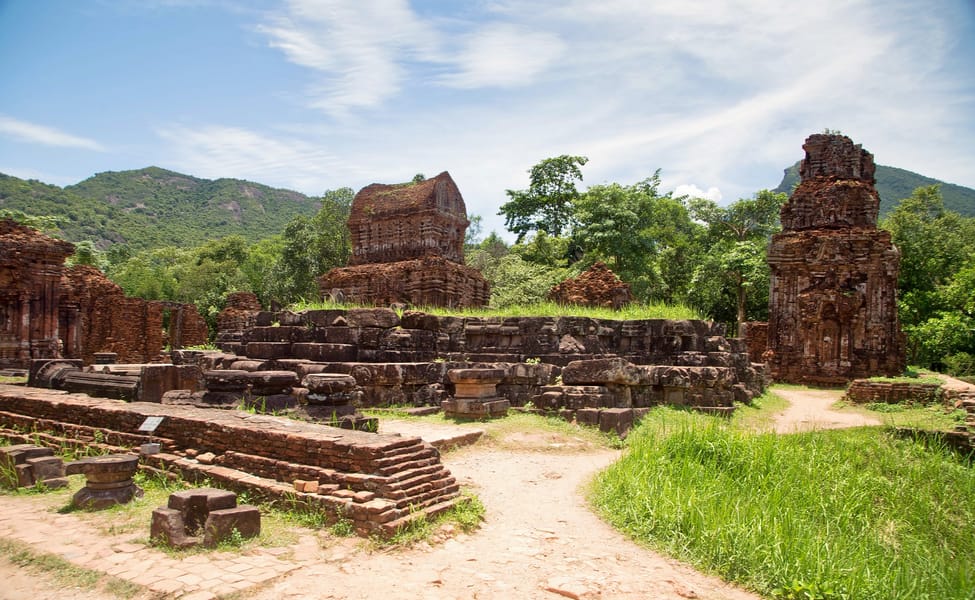 Outstanding Hindu structure in My Son

When is the best time to visit My Son Sanctuary?

So, My Son Sanctuary is usually busy and packed with tourists in the morning. In months of mid-September, October, November and December; there is lot of rain in My Son due to typhoons and monsoon. On the other hands, in summer time of April to July, the site is very hot and humid. Hence, the best time to go to My Son Sanctuary is from October to March when the weather is a bit cooler. If you go in the summer, let’s start the trip early around 8 o’clock to avoid the heat. Sometimes, you can do My Son Sunrise Tour that starts around 5:30 a.m from Hoi An. 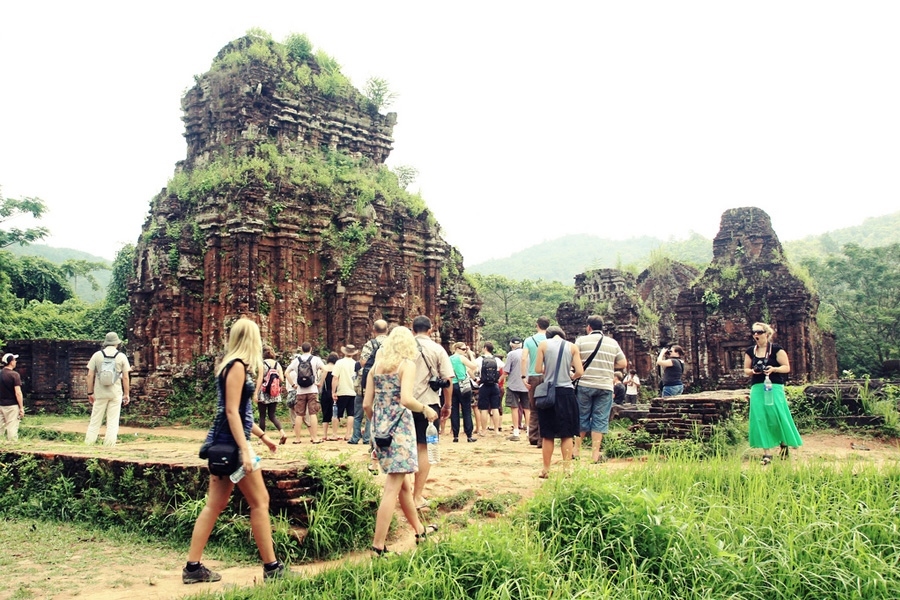 How to get My Son Sanctuary from Hoi An or Da Nang city?

If you come to Hoi An and would like to visit My Son, you can directly book My Son Trip from your hotel. Once you pay and get the receipt, the next morning, the tour group will come to collect you at the hotel. There are some travel agents that organise daily Small Group My Son Sanctuary Tour from Hoi An such as An Phu Tourist, Camel Open Tour, Premium Travel Vietnam (PTV).

If you prefer to go by scooter, you can hire it from your hotel or on the street, the price will be between 10 U.S dollars for one day. It will take you around 1h30 minutes to get to My Son from Hoi An. If you stay in Da Nang, you also can book My Son Sanctuary Group Tour from Da Nang or My Son Private Tour with PTV, or rent a motorbike to go there, it takes you roughly 1h45 minutes to get there. 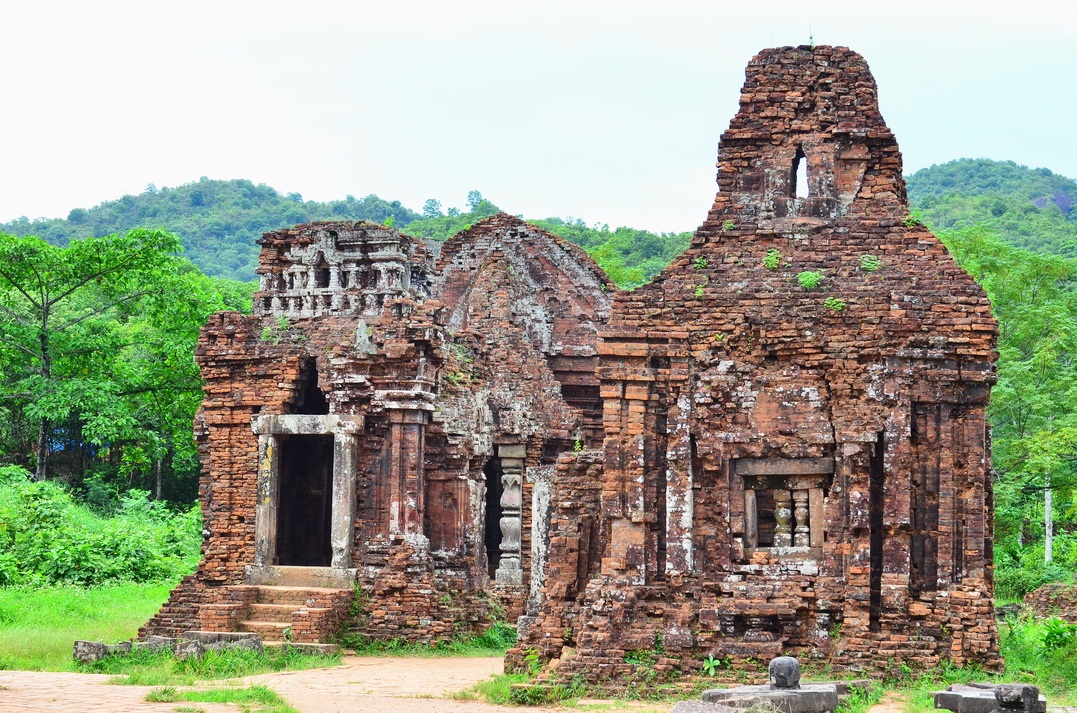 What to see in My Son Sanctuary?

Once you get to My Son, you will get transfer by golf cart to move in. When you get off, you will walk around 10 minutes to reach the site.

On arrival, you will visit three main groups of My Son of B, C, D. When you have done, you continue to across a small stream and visit group A that was totally ruined. Next, you walk up hill to pay visit to group G and finish with visit of group E and F. There is a way out there and you will see the restored group K on your right. 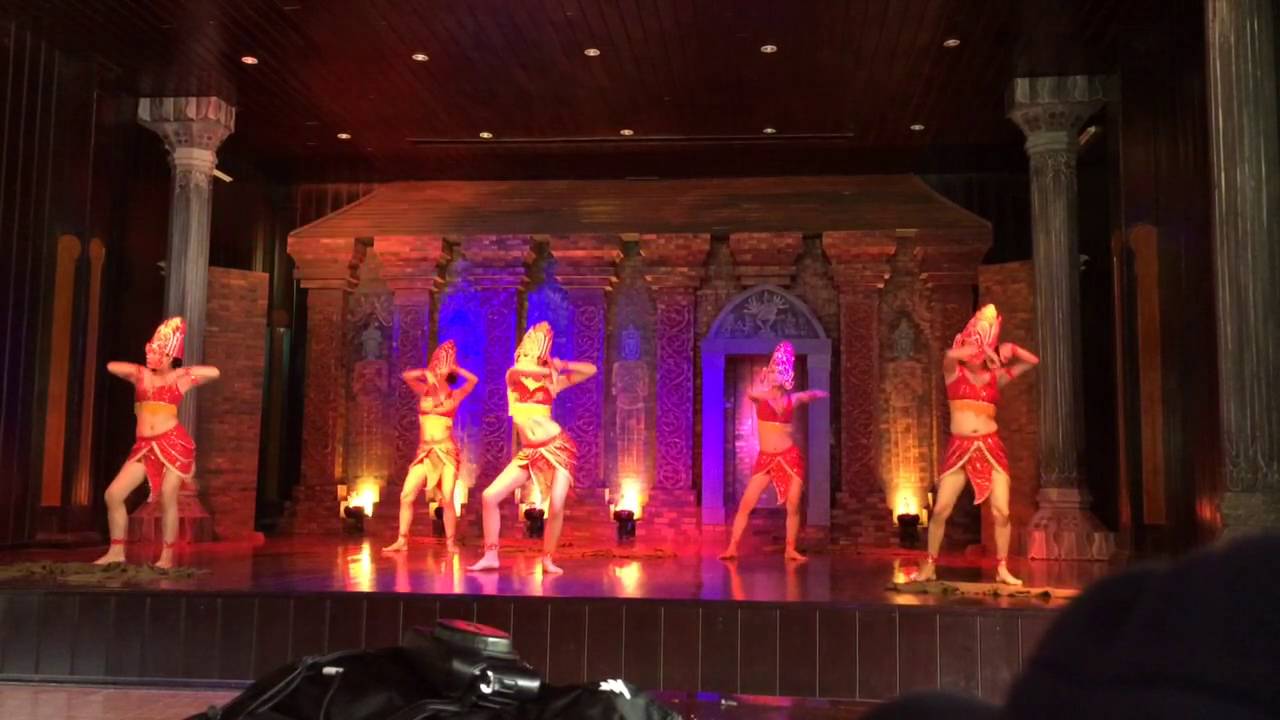 WHERE DO I BOOK THE TRIP?

Cam An Ward, Hoi An city