The tile-roofed Thanh Toan Bridge crosses a canal flowing  from he beginning to the end of Thanh Toan village (In Thieu Tri’s time 1841 – 1847, for being a name sake with the Eperor, it was renameed Thanh Thuy ), Thuy Thanh Commune, Huong Thuy  district  at present. The village is about 8km from Hue city on the road eastward.

Thanh Thuy village was established in the XVI century. Among the emigrants from Thanh Hoa following Lord Nguyen Hoang To Thuan Hoa, there were 12 heads who settied down there  to be 12 initial families of the village. One niece of the sixth generation of the Tran family – Mrs Tran  Thi Dao – offered the fund  to the village to build a wooden bridge so that the villagers on both sides of the canal could transport conveniently and benighted travelers  could rest on their way. Mrs Tran Thi Dao was a childless wife of a high – rank mandarin in Le Hien Tong’s regin. She wanted to used her money for charity. Her good deed did not only hand down to the villagers and Hue a valuable remains honoured by the villagers all their lives bus was  also rewarded many times by the feudal courts. In Canh Hung 37th year Emperor Le Hien Tong granted the village a document to praise rs Tran Thi Dao and exempted the villagers from many taxes for the to remember her and to live after her exaple. In 1925, Emperor Khai Dinh also granted a document to bestow her “Duc Bao Trung Hung Linh Pho” and to order the villagers to set up an altar on bridge to worsship her. 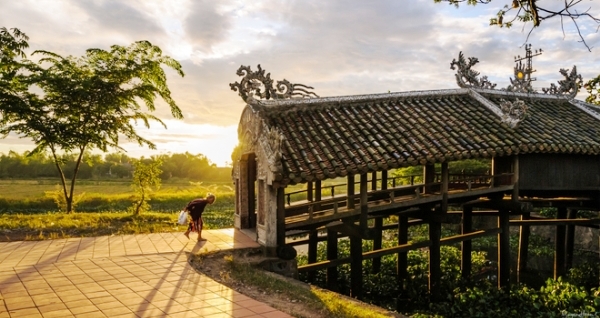 The tile-roofed Thanh Toan is an arched wooden bridge, 17m and 4m wide. On both sides of the bridge body are 2 rows of woonden flatforms and parapets for people to lean their backs. The bridge is roofed with tubed. A researcher into Vietnaese ancient aesthetics – Louis Bezacier – classified Thanh Toan a rare and the most aesthetically valuable bridge among those of Vietna. In  the fist half of the XX century, there were the two most famous bridges of this style Phuc Toai and Phu Khe in the north, Thanh Toan in Hue and Nhat Ban (e.i Lai Vien Kieu, also called Chua Cau) in Hoi An. The roofs of the bridges in the north are made of flat tiles, in the centre are made of tube tiles.

The tile-rooofed Thanh Toan is not only an ancient architectural remain with highly historic and cultural values but also a beauty spot. The bridge was built over 2 centuries ago and damaged many times by storms; floods and wars. However, after the bridge was destroyed, the villagers always contributed to repair, renovate and preserve it. the Thanh Toan bridge with its tile-roof has entered into them moods and aspirations of any generations as well as inspired the poetic souls of the the local people and travelers, their contents are stilled handed down among the people or engraved righton  the bridge.

With the tradition of “when drinking, remember the source of water” and respect of cultural remains, many generation of Thanh Thuy villagers have preserved a unique architectural work of Hue. In  September 1991, the bridge was greatly renovated from the old scale andofficially accepted by the cultural minustry  a natonal reains, a rare and appreciated beauty-spot of the whole country.