Thien Mu Pagoda is the most ancient, the most architecturally imposing and also the most beautiful pagoda of Hue City.

Thien Mu Pagoda was build on Ha Khe hill, Huong Long commune, 5km west of the ciy centr. The story of this place of scenic beauty is lengendary. It is said that there appeared a lady on Ha Khe hill who predicted that a true King would come to the place and build a pagoda which would bring all the Heavenly forces together to strengthen the Long mach (Dragon’s Vein). Since then, this hill  has been called Thien Mu mount. In 1601, Nguyen Hoang, (the governor of Thuan Hoa, also the first Lord of the Nguyen family in the south) came to this area and heard this legend from the local people. Claiming  to be the true King, he had the people enlarged the region to build pagoda and named it Thien Mu (Heavely Lady) Pagoda. Under tuw Duc’s regign (1847 – 1883) it was erennamed “Linh Mu” (Holly Lady) pagoda. 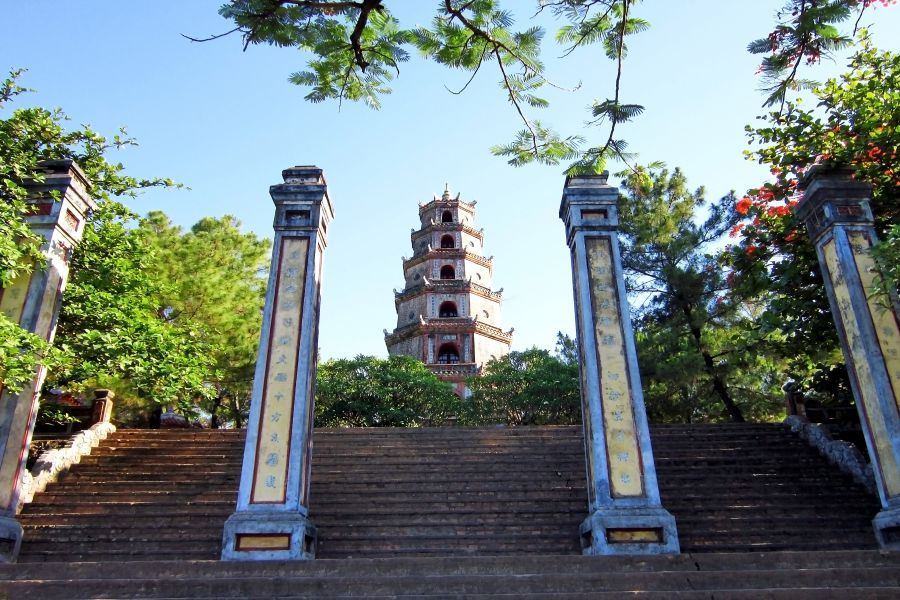 In 1665 Lord Nguyen Phuc Tan restored the pogada – In April Canh Dan (1710) Lord Nguyen Phuc Chu had a huge bell cast, 1,4m in diameter, 2,5m in height, 3,285 in weight. This is the biggest bell in Hue and the Lord himself composed a prose engraved on a stele. in 1714 – 1715, the pagoda was renovated and restored and many new items were constructed. Phuc chu also wrote a shorrt history to record his merits in strengthening Buddhism in Vietna and had it engraved on a stele 2.6 meters high, 1,2 meters wide, mounted on a marble tortoise intricately caved. In the XVIIIth, XIXth centuries, Thien Mu Pagoda was a huge, splendid  religious architectural assemblage with many temples, stele shelters, pavilions, storeys, ect. Many lords and  Nguye Emperors restored, renovated and embellished the majesty and imposingness of the pagoda.  In the war at the end of the XVIIIth century, the pagoda was badly damaged. In the firt half of the XIXth century, 1815 and 1831 Emperor Gia Long and Emperor Minh Mang had the pagoda renovated and embellished. In 1844 Thieu Tri Emperor had an octagonal tower built outside nghi Mon Gate. The tower is 21,24 meters consisting of seven storeys, each storey delicated to a Nhu Lai Buddha. The top storey worships the the Ton Buddha. At that time, all the genie statues were cast from gold. Later, these original statues were replaced by brone ones. The Emperor named the tower Tu Nhan (Charity) and after that it was renamed Phuoc Duyen (sacrament predestination) – In front of the tower, Huong Nguyen pavilion was built with 2 stele shelters on both sides. The stele on the right tellsabout the architecure of Phuoc Duyen tower and Huong Nguyen pavilion. The stele on the left engraved many poems of the Emperor.

In 1907, the pagoda was again restored, but not on a scale as large as it had been before. The whole compound of the pagoda is located on a flat rectangular land, 280 meters high and 100m wide. A stone wall runs around the area. In front of the pagoda flows a veng alluring tortuosity of the Perfume River – The compound of the pagoda is divided into two parts. The front part consists of commenmorated works such as the bronze bell, stone stele, brick tower (In front of the Nghi Mon gate here once lied Huong Nguye pavilion, but now only the ground, The Thanh stone foundation are left), Phuoc Duyen tower, the  stele shelter and the bell shelter; the back part  of Nghi Mon gate consists of Buddha – worshiping temples (Dai hung, Dia Tang, Quan Am) and the monnks’ houses, flower grardens and the the solitary pine forest.

For the last four centuries, Thien Mu pagoda with the resounding sound of the bell every morning and evening, with beautiful landscape at dawn and sunset or in the breezy moonlight has become the symbol of the gentle and poetic beauty of Hue. The pagoda bell has entered the folk verses, leaving a deep impression in the hearts of Hue people and of friends far and wide deeply interested in Hue.

The wind is swaying bamboo branches