The citadel (the outer wall) of Hue at present at was built during Gia Long’s and Minh Mang’s reign, from summer 1805 – 1832. Formerly, is was the capital of the southern Land of the Nguyen Lord (1687 – 1775), and then the capital of the whole country in Quang Trung’s time (1788 – 1891). At that time the size of the citadel was still small, situated in the south-east corner of the current citadel.

After capturing Phu Xuan and coming to the crown, Gia Long emperor decided to construct the Hue citadel on a large scale. The  Emperor himself together with the andarin in Giam Thanh Ve studied the topography, designedthe surface, shape, size and conducted its constructive procedures. 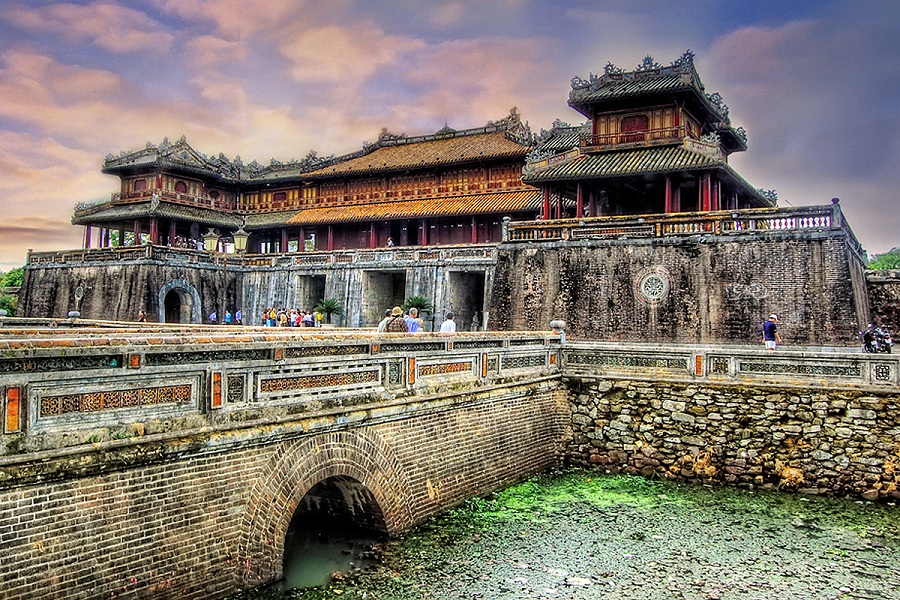 Based on the principles of ancient oriental geomancy, the Ying  – Yang and the five-element doctrines brought from China, the architects at that time designed the citadel to face the south and chose Ngu Binh mount as a front screen, Hen and Gia Vien islets on the rives as “Left blue dragon” and “Right white tiger” waiting upon in of the citadel.

The size of citadel is very large, its area is 520 ha and circumference is 10,000m including the land of 8 villages: Phu Xuan, Van Xuan,  Dien Phai, An Van, An Hoa, An My, An Bao. The Lai and parts of the two rivers of Bach Yen and Kim Long.

In the first constructive phase in summer 1805, the Nguyen dynasty mobilized about 3,000 people and soldiers from the central provinces to Hue to block the rivers, dig the  moats and embank a primary earthen, the task was implemented for many year. In 1818, the  number of soldiers and workers amounted to 80,000/ they began paving bricks on both sides of  the front (south) and the right (west) of the citadel. The left (east) and the back (north)  were paved in 1822. After that emperor Minh Mang had the murdetir built on top of the outer walls in 1831 and 1832.

The citadel  is almost square in shape. Its wall is 6.60m high, 21m thick. Access to it is via 10 gates. At the  base  of the outer wall is a moat system running on the the 4 sides of the citadel. About 200m away from the moat is a deeper and wider canal sytstem called “Ho Thanh Ha” (to drfend the wall). Its average width is 35m and length is 7km.  The moat and canal systems create two obstacles to strengthen the offensive task of the citadel.

On the top of the walls are “bastuon”, “lunette d’angle”, “embrasure”, “murdetir”, “mirador”, etc. For guarding and self-defending. In the middle of the the front part  of the citadel is a high and majestic flag-tower.

Hue citadel was built based on the combination of principles ofthe oriental architecture and the french military  architecture (Vauban style). It was applied skilfully adapting to the real photography so  that is has becom a unique aesthetic military construction, a cultural wonder of the nation.